Back
Written by
Jack Crabtree 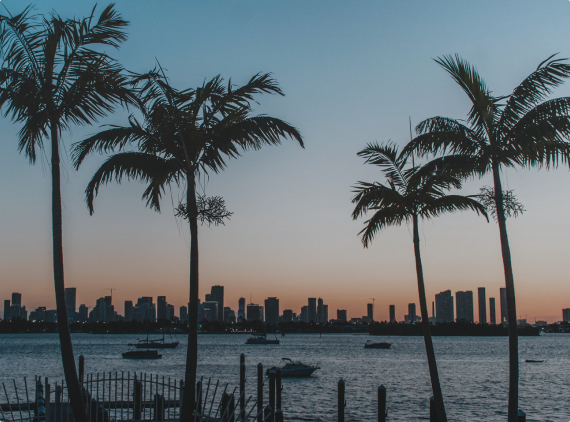 With over 4% of foreign purchases in the United States coming from the UK, they make up a large group of foreing nationals purchasing property in the USA.

There are many reasons as to why people move from the UK to the US though and Different people also have different needs, for example you may be looking to move for better work opportunities. You might also be looking to retire, and be looking for a better standard of living and quality of life.

When looking to migrate from the UK to the US there are many options available, from the summery climate of Florida through to the hustle and bustle of New York, it can be challenging to choose where is best to support the move. Depending on circumstance and what someone is looking to achieve can be the only way to tell where is best to move, but outlined below are the top 3 favourite US property destinations for UK Citizens.

Florida remains the top location for UK citizens to buy property with 21% of all foreign purchasers buying in the state. Florida offers many benefits for UK citizens looking to move for either work or retirement. With great weather, and great work opportunities the state is likely to have options for you all the way from Fort Lauderdale to Miami. As a location to retire Florida can offer a lot for UK citizens.

It’s not the weather that makes Florida such a great option compared to Britain though. Florida has some of the cheapest tax regimes in the US and is far cheaper than tax systems in the UK. Whilst this may not impact some retirees in the UK, it’s a safe bet for those who can afford to move in their retirement.

Outside of work and retirement though, Florida can make a great option due to the larger number of UK expatriates already living there. With over 400,000 British expats already living in the state, it definitely makes the move a little easier.

Ranking third on the list for most common places for foreign purchasers to buy property, Texas has a lot to offer UK citizens. As the capital of the lone star state, Austin can be a great choice for Brits looking to leave the UK, especially those looking to move with families. With great options for work and cheap property compared to the rest of the USA, Austin makes a great choice. In fact so many British citizens want to move to Texas in general it now accounts for around 7% of all property UK citizens purchase in the US.

As the home of some of the biggest tech firms in the world, such as Dell, as well as hosting regional offices for companies like Apple and Google, Austin is another great option for those looking to move for work. Another benefit to this city for workers is the lower tax regime. There is no income tax in Texas which is a great perk compared to the 20-45%+ income tax due in the United Kingdom

Whilst it has a higher property tax rate compared to other states, at 1.69%, it has a lower house price cost, compared to the rest of the US, with a median home costing around $563,000 (in August 2021). This coupled with the higher earning opportunities make the cost worth paying to be able to live in Austin.

Called the city that never sleeps, New York has a burgeoning British community that attracts millions of tourists from the UK each year and thousands of UK Citizens that chose to stay and work. Whilst a shared language is about the only thing in common between New York and the UK, there are still plenty of reasons about why people move there.

As the centre for Financial Services and Media, New York can offer unrivaled opportunities to those that work in those sectors. Add to this, the higher wages and lower taxes compared to the UK and New York has a better cost of living compared to comparable cities like London.

On top of all this, the city has great connections and amenities with a subway that runs 24/7 and shops that do stay open all the time, the city can offer expats services to meet all their needs no matter the time of day. All this said and done though, New York is likely to attract Londoners more than any other part of the United Kingdom to emigrate.

Florida can be seen to offer more than any other state when it comes to catering for all needs. Whether moving to Miami for work or Fort Lauderdale for a better retirement, it offers the best of both worlds. Austin can be a great choice for those people looking to move, especially with families. It’s great employment opportunities combined with cheaper property can be appealing to those who need to consider both options. Finally New York is a great option for those looking to move for better career opportunities without the need to consider dependents.

All in all though, the wider USA can be a great opportunity for anyone looking to emigrate from the UK, irrespective of reasons.